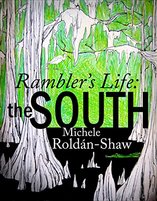 Rambler's Life: The South
When hard times ratchet down on indie journalist Michele Roldán-Shaw, she determines to live out of her truck rather than quit being a writer. Over the following year she explores the South—camping, traveling, staying with friends and strangers—and chronicles her adventures in this underground classic. Here are tales of solitary hikes in Appalachia, canoeing amongst gators in the Okefenokee, fighting in martial arts tournaments, touring haunted plantations, skinny-dipping in Florida jungle springs, meeting folk art legends in their own environments, tracking pygmy deer and completing subversive bike-smuggling missions in the barrier islands of Georgia. Along the way she examines local history and environment, tells the stories of characters she meets, and reflects on the nature of existence. In the tradition of Jack Kerouac, Charles Kuralt and Huckleberry Finn, get ready to ramble the South with open eyes and a free spirit.

Rambler's Life: The South Reloaded
Indie journalist Michele Roldán-Shaw continues her Southern adventures in this sequel to the underground classic "Rambler’s Life: The South." Here are tales of gem mining in the Smoky Mountains, boating and dancing zydeco in Cajun Country, backpacking the Swamp Fox Trail in honor of Revolutionary War hero Francis Marion, camping on a cotton plantation and hearing live blues in juke joints of the Mississippi Delta, interviewing descendents of Southern visionary artists, documenting true accounts of spirit possession and sharecropping in rural Georgia, getting cornrows and shoeshines in the hood, tracking old trails of pirates and moonshiners, and discovering the path of true happiness at meditation boot camp. Readers have compared her work to writers like Paul Theroux and Bill Bryson, and books such as "Blue Highways," "Wild" and "Eat Pray Love." So get ready to explore the South with keen observation and a seeker’s spirit.